Ten areas, representing a range of habitat biomes, are to be targeted as model sites. Each will be a minimum of 100,000 hectares although in some cases there may be potential for further expansion and linkage with existing protected land into a network of wild areas.

The initiative was started at the Wild Europe conference in Prague in 2009, where participants were invited to submit potential areas together with nomination of prospective local partners for coordinating their restoration and protection.

As explained in the brief for Wild Europe Field Programme (see brochure depicted above), this is based on wilderness principles, with absence of human infrastructure and no extractive activities in large core areas.

Opportunity for the Programme is derived from the large scale abandonment of former farmland that has occurred across some 40 million hectares in Europe, which provides unprecedented potential for restoration of substantial stretches of wilderness linked to existing protected areas.

Extensive managed grazing will be used to retain a balanced mosaic of open savannah and wooded savannah and forest and seek to maximise richness of biodiversity.

Emphasis will be placed on using nature tourism and other low impact activities to provide income and employment for local communities and landholders. Wherever possible, such benefits will be supplemented by facilitation of payments for ecosystem services and other sources of funding.

Based on applications from all over Europe, five areas have now been selected as the first model projects to show how the vision can be put into practice. 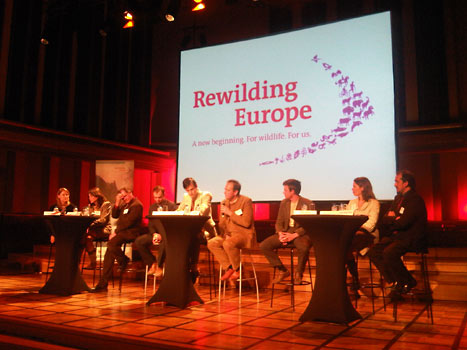 Representatives from the five new areas participate at the launch

The launch was attended by partner organizations from the first five field projects areas together with representatives from the European Commission, funding institutions and many NGO’s.

Rewilding Europe has since secured a substantial amount of funding and preparatory work has begun in the five areas.