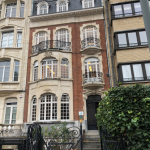 The recently established IUCN Task Force on Rewilding was unveiled on 8th of October in Brussels, at a meeting hosted by Wild Europe.

Taking place in the IUCN offices on Boulevard Louis Schmidt, the meeting was attended by representatives from DG Environment and DG Clima, with participation and written inputs from conservation NGOs and land user organisations.

As ‘rewilding’ gains momentum in Europe, there is a need for a formal definition of the concept, together with a standardised framework which the various initiatives can reference.

Any requests for further information via info@wildeurope.org please.