These include carbon sequestration, flood mitigation and alleviation of soil and water pollution – all of which are important ‘green infrastructure’ benefits capable of tackling the impacts of climate change.

The value of such services can frequently be quantified and linked to prospective funding for large scale protection and restoration schemes – often from public and private sector sources not normally associated with conservation.

The sheer size of many wilderness and wild areas can deliver such services on a significant scale, and their unmanaged natural condition also offers important advantages – for example undisturbed old growth forests, peatlands and wetlands have considerably greater carbon storage capacity than their more managed equivalents.

Carbon markets already enable corporate funding from offset agreements and there is growing potential to generate finance from high energy users and polluters: carbon offset and credit income for sequestration from power utilities, industry with high energy-usage, and the general CRS and PR agendas of the corporate sector.

For example 4.5 million euro of carbon offset funding potential has been identified for old growth forest protection through a model commercial study of one area in the Carpathians, with 22 million projected for another site further East.

This opportunity applies as much to restoration as to protection projects – for example the reduction in climate changing gas emissions (carbon dioxide, methane and nitrous oxide) resulting from the transformation from net positive emissions on marginal agricultural land to net negative emissions on restored habitats.

Flood mitigation and other hydrological services

Protection or restoration of upland watersheds and lowland sinks that reduce downstream flooding or pollution can attract significant funding from local authorities, statutory agencies and utilities anxious to reduce the cost of downstream flood prevention and water treatment, or insurance companies seeking to lower the incidence of compensation claims.

These benefits can be supplemented by corresponding retention of water through the presence of natural habitat in the dry season – an attribute of growing significance to farming and urban interests in areas adjacent to wilderness as rainfall patterns become more erratic with the advance of climate change.

There are clear benefits of size in planning large area restoration of an entire watershed or a lowland sink, in the latter instance applying both hydrological engineering to return water courses to their former more sinuous form and re-establishing riparian marsh and wetland forest to reduce discharge energy and create capacity for absorbing surplus flow.

Research into these hydrological benefits is rapidly proving their value. In Wales, a scheme to re-establish natural vegetation in upland areas denuded of natural habitat by overgrazing has already resulted in significantly reduced rates of run-off and is now being more widely assessed by the Centre for Hydrology and Ecology (CEH) in Aberystwith.

A much larger-scale assessment of restoration potential is underway on the Danube basin. 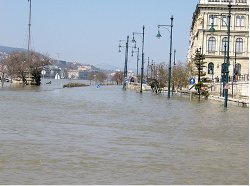 A new WWF study in 2010 showed that restoring the natural capacity of the Danube floodplains to retain flood waters would help protect people from flood impacts, cost much less than the damages caused by floods, and, in addition, provide important benefits to nature, people, and local economies.

Human intervention in the Danube area has degraded and more than halved the area of floodplains that can retain water and minimise flood impacts.

“This year Romania, for example, has been hit again by severe storms and floods, which have killed 25 people and forced 16,500 more to leave their homes. Unfortunately the frequency and intensity of flood events is expected to continue. The good news is that the solutions for flood management that work with nature, not against it exist and are within arms reach”, said Orieta Hulea, Head of Freshwater at the WWF Danube-Carpathian Programme.

Floodplains are like natural sponges, they act as natural storage reservoirs allowing large volumes of water to be stored and slowly and safely released down rivers and into the groundwater.

If cut off from the main river beds and drained for agriculture, as has happened on the lower Danube and across most of Europe in the last century, their potential for flood retention is lost and the risks from floods are increased.

The Danube River Basin Management Plan, which was officially adopted by all Danube countries, including both EU and non-EU member states, already includes 473,000 ha of floodplain in Romania to be reconnected with the river. But the implementation of these measures is planned to start only after 2015 mainly due to insufficient allocation of financial resources and land ownership issues.

WWF calculated that if at least 100,000 ha from these potential areas would be restored – at an estimated cost of 500,000 €/km² – this would mean an investment of 500 million €, costing less than the damages caused by floods or the investment in higher and stronger dykes.

The restoration of the 196 areas with highest potential identified by WWF along the longest European river would cost about 6 billion Euro.

“If the EU Danube Strategy is to become an effective tool to guarantee the necessary political commitment and funds to protect the Danube’s people and its rich biodiversity, floodplain restoration needs to become one of its key priority actions. The recent floods that have hit the area show us that inaction till 2015 is not an option. We need to make sure that at least one large scale restoration project is implemented in each Danube country by 2015.” said Sergey Moroz, EU Water Policy Officer at WWF.